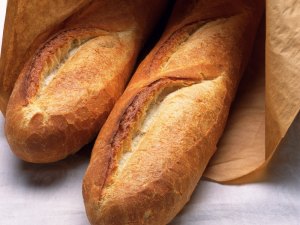 “Do nothing from rivalry or conceit, but in humility count others more significant than yourselves.” -Philippians 2:3 (ESV)

I was having lunch recently with a group of ladies and found myself in a lively conversation with a friend across the table about bread.  I had just received a bread maker for my birthday, and was getting ready to share a really funny story about the first loaf I made, which ended up looking somewhat like fried chicken.  Clearly, it wasn’t what I was expecting, and I was having fun retelling my experience.  But there was someone sitting with us who is a bread expert and began sharing a litany of reasons why my bread turned out so terribly.  Of course, I knew it was probably this or that, and truthfully I have made great loaves since then.  I was simply sharing a funny story.

The woman continued talking about her experience as a bread maker, using her own grain, milling it, making bread often for her family, etc.  She definitely knew her stuff and received a lot of respect for her knowledge.  But what she didn’t know was that I’ve been there, and I’ve done that.  As a matter of fact, I believe I still have a 10-gallon bucket of Prairie Gold Wheat stored away in my basement somewhere.  When I had more time for such domestic pursuits, I enjoyed the labor of making bread from scratch.  And it’s not that I don’t agree that freshly milled wheat is healthier than anything store bought or otherwise, it’s that my story was washed under the table by a bread baking expert, and I was left feeling as if I just lost a battle of domestic one-upness with the resounding, unspoken opinion that one isn’t a serious bread baker unless she mills, kneads, forms, punches and bakes her dough by hand using the Bread Beckers’ no-fail 5-loaf recipe.  I assure you, competition is fierce in the kitchen!

But this is one example of many that I’ve noted these past few weeks.  I wonder why I’m just now beginning to see things from this lens?  I don’t read the KJV, therefore I’m not a real Christian.  I take my car to an automatic carwash, therefore I’m ruining the paint.  And occasionally I accidentally grab the dinner fork to eat my salad.  Sometimes I just like living dangerously.

Last year I have been told that I don’t breathe right, that I should let my hair go gray, and that I should not wear heels.  I’ve also been told that my camera is mediocre, that I work too hard and don’t weigh enough, that I should have more children, that my children are sheltered (really?), that I’m too old to run, and that I must turn off all electronic equipment as I board the plane.  Okay that last statement was a rule, not an observation or opinion, but what consistently amazes me are the people who feel brazen enough to express such opinion of what I need to do to be a better person, or at least a person who is good enough for them.

What’s really at the heart of this is that I not only am victim to such judgment and criticism, but I have also been the perpetrator.  How sad, when I look back, that I may have offended or belittled someone because they didn’t meet a standard of living that I should expect of them.  My own comments and observations are no better than those thrust upon me, and I find myself swimming right along with the sharks looking for the next person to give my “good advice” to and form into my image of who I think they should be.  Perhaps that’s why I’ve taken note of these things lately.  Perhaps it’s time to swallow the pill of bitter reflection and chase it down with humble pie.  It certainly doesn’t taste like cheesecake, but it’s good for the soul.

Yet I think we sit in a majority pool of judges. We go to bed with a great idea and wake up with an ego.  We spend weeks perfecting a subject and become experts overnight, elevating ourselves to places no man should ever tread.  We fall prey to sins of aesthetics, materialism, knowledge and ideals.  We judge.  We determine that the Holy Spirit has left the building and it’s up to us to right the world, when in reality, we have kicked the Holy Spirit from the throne and put ourselves in His place.

And who are we to judge?  Evidently, we forget.

There are a lot of theological responses and practical applications I could make here, but the verse which continues to resonate in my head as I form these words is from Philippians 2:3.  Paul warns that we should do nothing out of rivalry or conceit, but consider others more important that ourselves.  This is exactly what Jesus is talking about when He challenges us in Matthew 22 to love our brother as ourselves.  But Paul goes further in Philippians to not only look out for our own well-being, but also the well-being of others.  If you define the word well-being, you will see that it means comfort, joy, abundance, and contentment.

Think about life on a pillar.  Judgmental man cannot possibly reach the ground and wouldn’t want to anyway.  He likes the pillar.  It took him a lot of training and hard work to get there.  He earned it.  Plus, you can’t beat the view, especially at the dawning of a new day or the resting of the sun on the horizon.  People are amazed he ever made it up there, so they look upon him in awe, and that’s the part he likes best: to be admired.  It doesn’t take long, however, for him to get a sense of loneliness.  And while he’d love to just climb down that pillar and join the rest of society, he can’t.  He’s an expert, you see.  He has made a name for himself.  So instead of reaching down to his brother, he begins making observations from his place on high.  And then, from his view, he believes that if everyone just lived life the way he does, then they would all be happy.  So he stands tall on that pillar, pulls out his bullhorn and begins making judgments, one after the other.  Some are funny, and people laugh.  But his judgments fiercely grow.  They are brash, bold, determined and presumptuous.  He forgets God because he has become his own god.  He is no good to the people and certainly no good to himself.  Sadly, he has forgotten the God who loves him so and left his first love, trading it for a very shallow love of himself.

Paul was warning the Philippians in chapter two not to become high and lofty, to leave their judgments of others behind.  He uged them to look out for others, providing them with encouragement so that they too could enjoy a life of cheer and abundance.  Oh, how we tear down the frailest of hearts when we wrongly judge or accuse others!  How we rob others of joy and peace of mind.  God forgive us!

Paul gives a few more final commands to be obedient for God’s will and good pleasure, and to do things without grumbling so that we will be made blameless and presented without guilt.  We are to hold fast to the word of life until the end of time, until the day of judgment, so that we will not be guilty of vain pursuits.  We are to shine! And this is the exact recipe for living a life of humility and allowing the Holy Spirit to do His good work not only in the lives of others, but especially in our own lives.

So this is a new year and a new day.  It marks an opportunity for humble reflection and genuine transformation.  Let’s all strive to make it a year of humility and simplicity as we look after the well-being of others, building them up and considering them better than ourselves.  Let’s make it our year to shine!